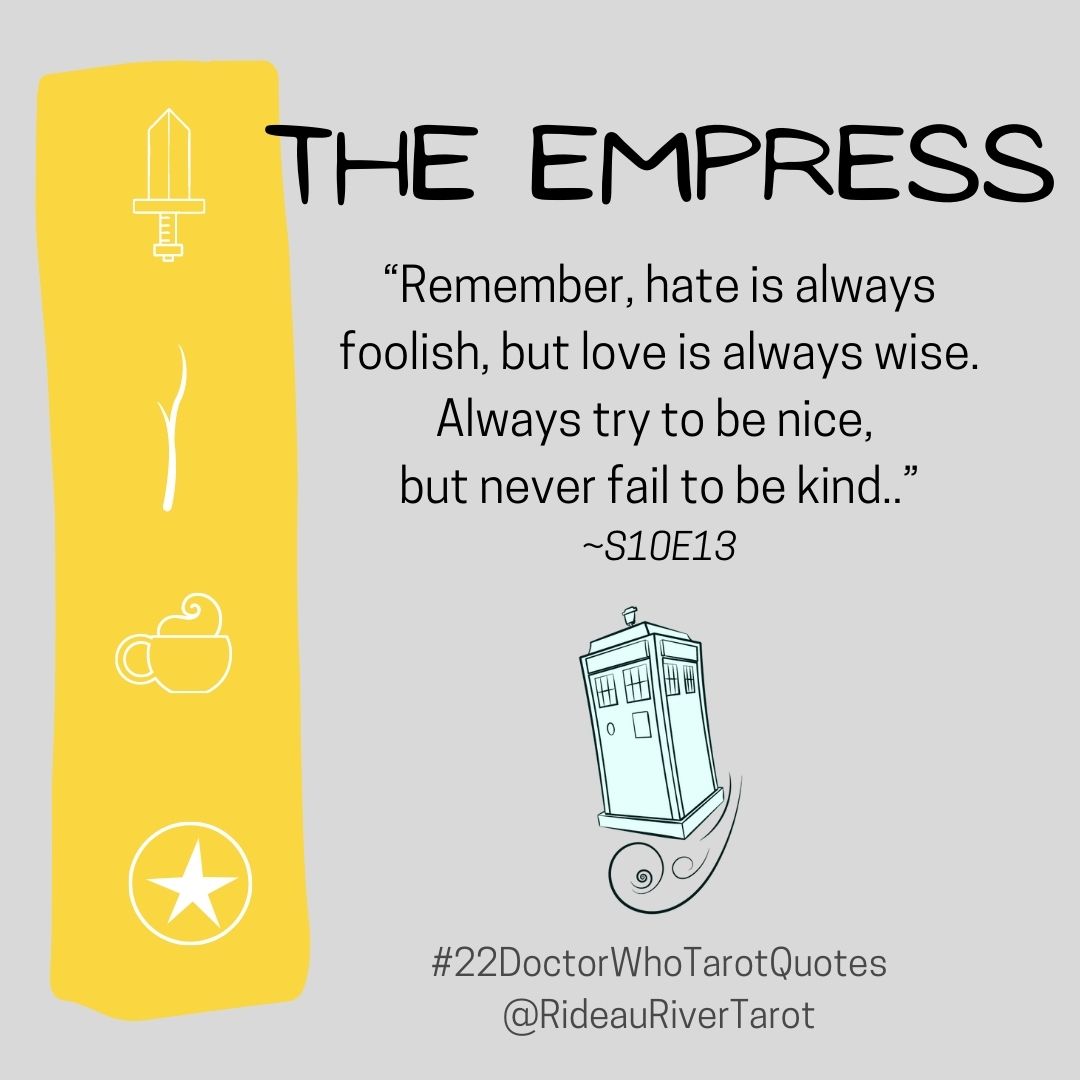 As we work our way through #22DoctorWhoTarotQuotes, my collection of quotes from Doctor Who that illustrate or align with traditional interpretations of each tarot card of the major arcana, we’ve reached the Empress. The Empress is the archetypal earth mother, a powerful being of feminine energy who comes to reflect your joy and love in life back at you. To illustrate her, I’ve chosen a snippet of a longer quote: “Remember – hate is always foolish and love, is always wise. Always try to be nice, but never fail to be kind.”

These words are spoken by the Twelfth Doctor, Peter Capaldi, in the moments before he regenerates in the series ten Christmas special “Twice Upon a Time.” He’s talking to his future self (who the audience knows but he does not is about to regenerate into female form) but also trying to reassure his current self, I think. Here’s the full quote:

You wait a moment, Doctor. Let’s get it right. I’ve got a few things to say to you. Basic stuff first. Never be cruel, never be cowardly. And never ever eat pears! Remember – hate is always foolish and love, is always wise.

Always try to be nice and never fail to be kind. Oh, and – and you mustn’t tell anyone your name. No one would understand it anyway. Except…. except children. Children can hear it. Sometimes, if their hearts are in the right place, and the stars are too, children can hear your name. But nobody else. Nobody else. Ever.

I like this quote for the Empress for a lot of reasons. The Empress is about abundance, generosity, and kindness, and tells us that our needs will be met. The Empress is a maternal figure, and this advice to be kind is indeed very motherly. Certainly, as a mom to three, I’m most concerned that they grow up to be kind humans first and foremost. The Empress is about nurturing and looking inward for grace, something the Doctor is doing as he passes the baton to his next iteration, exhorting his next regeneration to be a better version of himself. And, most interestingly for me, this quote is spoken from a male incarnation of the Doctor who has learned through his travels how to be not just clever and witty but kind as well, and he has learned that largely through the females in his life: Clara, and River, and Bill. And then with these words he regenerates into the first female Doctor in the storied 50+ years of the franchise.

As an aside, I truly loved watching Capaldi’s Doctor and his preoccupation with goodness and being kind. You can see this evolution from his query to Clara (“Am I a good man?) and Clara writing him crib notes on how to be nice to his stirring exhortation to Missy to “just be kind” to his regeneration muse to his future self. I had a hard time choosing between the quote above and his final speech to Missy to use for the Empress. It’s another beautiful quote:

If I run away today, good people will die. If I stand and fight, some of them might live. Maybe not many, maybe not for long. Hey, you know, maybe there’s no point to any of this at all. But it’s the best I can do. So I’m going to do it.

And I will stand here doing it until it kills me. And you’re going to die too, some day. And how will that be? Have you thought about it? What would you die for? Who I am is where I stand.. Where I stand is where I fall. Stand with me. These people are terrified. Maybe we can help a little. Why not, just at the end, just be kind?”

Oh my goodness but I love the Doctor. I can’t read these quotes without feeling my heart soar. I was truly fascinated by the way the Twelfth Doctor’s sojourn explored gender issues. But what do you think? Do you think this idea of embodying kindness is in alignment with your understanding of the Empress? Do you think the Doctor’s regeneration from a male form into a female form aligns well with the characteristics you associate with the Empress? As always, I’d love to hear your perspective.

As we approach the end of an Emperor year, come back next Monday and we’ll look at a Doctor Who quote that embodies the Emperor in our continuing series of #22DoctorWhoTarotQuotes. 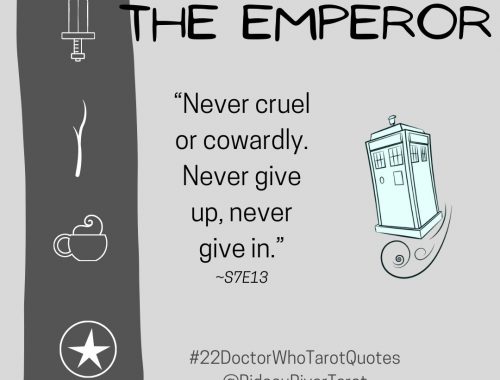 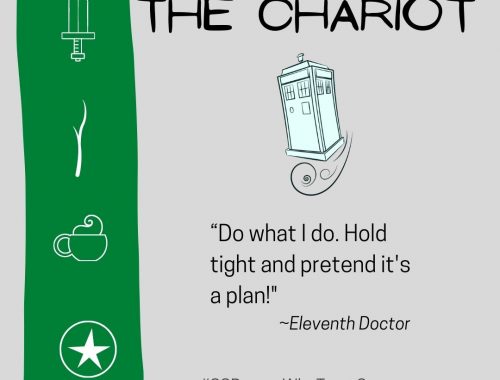 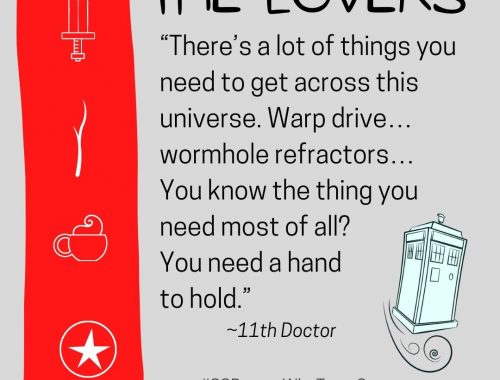